An 11-year-old’s review of The UnderTakers: The Last Siege of Haven

Posted on June 5, 2015 | 3 Comments
Before the review, a note from “Mom”:
I would be remiss if I didn’t mention how I first encountered a Ty Drago book.  For those of you who don’t know me, I have three sons. 14, 11, and 9.
My 14 year old (AKA the Monomaniacal Middle Grade Reviewer) is an avid reader. Always has been. After years of struggling to get Middle Dude to even read a comic book, I’d given up. Then I started having the same trouble with Littlest Dude. In a panic, I rescheduled a weekend to bring Littlest to meet Dan Gutman… the author of the only book the kid agreed to read if I twisted his arm.  Middle Dude came kicking and screaming (Well, not that bad, but he wasn’t happy)

Anyway, this is where Ty Drago comes in wearing a big old red cape

(Well, kind of. We actually didn’t even meet him) … 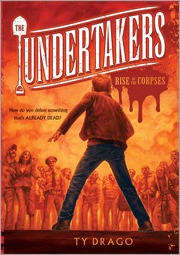 While we were buying a few Dan Gutman books at the Barned and Noble stand, Middle Dude comes up and hands me this book. “Can we get this?” he asked. “It looks sooo cool!”
I flipped over this very thick book 480 stinking pages. It was HUGE.  I said, “You’re not going to read this.”
“Yes I am,” he pleaded. “It sounds awesome.”
I stared at this monstrous book that I knew would end up as a doorstop or mashed in the toy graveyard in the corner of his room. With a sigh, I purchased The Undertakers, figuring if he read five pages, I was way ahead of the game.
That is when the magic happened. That night, I found Middle Dude hiding under the covers with a flashlight READING.  Did you hear that? R.E.A.D.I.N.G.
I couldn’t believe it!  A few weeks later, he was done and asked for the second book. And then the third. And then the on-line material!

This kid who hated reading, was suddenly devouring Ty Drago books.  And once he blew through them all, he was far more open to trying other books.
Now he reads every night with a smile on his face. Thank you Ty Drago!  You are my hero.
Enough of my babbling … Here is Middle Dude’s review.  I was going to correct his punctuation and typos and stuff, but I figured I’d leave it as he typed it.  Enjoy!

The Last Siege of Haven.

.
To Ty Drago,
Over all i really liked the book. It was literally non stop acition and i read most of it on one night because it was so great. The only thing i disliked was that most of the book was based on getting amy to haven.

Throught out the book i just kept thinking in my head oh my gosh what will happen next. my favorite part of the book was when they were being chased by the baby malum, it really added alot of action to the book, like a hole new species.
another part i like was when helene got out of her homeless old lady suit for backup. that came out of no where. When prentended to lose his sight i was like oh my gosh how did he lose it he isnt eighteen yet and a bunch of other questiosn like who will be the leader.

i enjoyed the part when they set haven with traps so the corpses wouldnt get in. i was also sad when [SPOILER REMOVED] died, but at least {SPOILER REMOVED} saved [his or her] friends.
overall this was one of the best books that ive ever read and i cant wait for the next 2 (i think there will be 2 more) books that you will write.
it always seemed like every second was an hour when i waited for your book “the secret of the corpse eater”.
i hope it wont be like that for the 5 book. i hope that wont happen this time.
Happy Reading,
[Middle Dude signed his name.  So cute! but Mom is removing for privacy’s sake]

Rafflecopter! Enter to win one of 5 digital copies of Last Siege of Haven (The Undertakers #4) by Ty Drago Click here

Ty Drago does his writing just across the river from Philadelphia, where the Undertakers novels take place.  In addition to The Undertakers: Rise of the Corpses,The Undertakers: Queen of the Dead, and The Undertakers: Secret of the Corpse Eater, he is the author of The Franklin Affair and Phobos, as well as short stories and articles that have appeared in numerous publications, including Writer’s Digest.  He currently lives in southern New Jersey with his wife and best friend, the real Helene Drago née Boettcher.

Middle Dude received an arc for his fair and honest review. Where he would never pan a book (He’s cool like that) He has, like his older brother, respectfully declined to review a book after reading. He wouldn’t have typed all that out if he didn’t feel strongly about the book.

Like Loading...
This entry was posted in Book/Movie Review and tagged Book Review, jennifer eaton, jennifer M. Eaton, the last seige of haven, The undertakers, ty drago. Bookmark the permalink.

3 responses to “An 11-year-old’s review of The UnderTakers: The Last Siege of Haven”