Please don’t come and arrest me because of by browser history! @DanaProvo

Posted on January 23, 2017 | Comments Off on Please don’t come and arrest me because of by browser history! @DanaProvo

When writing a book, one of the most important aspects is research.

Authors are not only wordsmiths, they are also doctors, lawyers, teachers, and whatever else their characters dream of being. Authors need to research as much as they can about what they are writing. Sometimes a character will change their path and start walking toward an unknown area of expertise and it’s the author’s job to make sure all

the facts are correct. I tend to write realistic fiction for young adults and adults so when I come across a subject I’m not familiar with, I put on my researcher hat!

Writing the first draft of Bleeding Hearts came easily for me. But when it came to editing, there were some parts in the book I had to stop and do extensive research for.

Those are only ten things I looked up when I started editing Bleeding Hearts.

I even got my husband to demonstrate how a woman could easily overpower a man in a crisis or get out of a choke hold.

Yes, that was an interesting conversation, but he helped me.

The next time you want to start a realistic book, make sure you set aside some much needed research to make your book as accurate as you can.

Find out more about my book and even read an excerpt. Bleeding Hearts is a new adult, romantic suspense novel.

Orphaned at an early age, now twenty-four-year-old Camryn Lucks is ready to commit to find that special someone, and so accepts a date from a charming, gallant, handsome stranger. The last thing she imagines after accepting that first date with Carson would actually be the beginning of her worst nightmare. 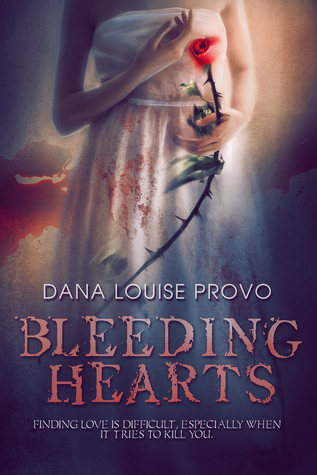 Red roses, a reminder of her parents’ killer, soon become an emblem of horror for Cami as one by one, those closest to her fall victim to a serial killer. Cami becomes an obsession for Carson, the man she had finally allowed herself to love. Not only is he vying for her heart, but also her life.

Finding herself in a whirlwind of torments shadowed by the blood-colored bloom, Cami finds solace in Isaac, a neighboring police officer. She’s desperate to escape the haunting memories, but she must revisit them in order to catch her would-be killer. Living life in constant fear has driven Cami to second-guess every choice she makes. Will the police catch the illusive murderer, or will Cami be forced to face him once again?

You can Purchase Bleeding Hearts here!

Here is a short excerpt of the first chapter:

My arm trembles as I grip the cool handle of my pistol, keeping a firm grasp to ensure it doesn’t slip out of my sweaty hand. It usually stands sentry in my left nightstand to scare the nightmares away. But this isn’t a dream. The room is dark and hides the face of the man whose intent is to kill me. But I know who he is. A metallic taste fills my mouth; I want to gag. My blood drips off the blade in his hand in slow, steady beats on the carpet. My arms shake as I lift the barrel and point it in his direction. He doesn’t move. His heavy breaths alert me to the meager distance between us.

We’re at a stalemate.

A soft glow from the lamppost just outside my window casts a sliver of light on his face. His dark, beady eyes that I have grown to know rake over my body like I’m another one of his many victims. He lifts the edges of his mouth into a smile. My heart plunges into my stomach. I know what that sinister expression means, and I think back to all the times he had looked at me like that before. I had been so blind.

Before I react he lunges at me, grabbing onto my waist and twisting me to the ground. I shriek as my head slams against the bed frame. Black spots flood my vision. I squeeze my hand only to find it empty. My gun is gone. The sound of the knife clattering on the floor gives me slight hope. Not much though. He climbs up my body trying to pin my arms to the floor. I thrash my fists around, desperate to knock him off.

“Get off!” I scream, pulling on his shirt and kicking him off balance. Wrapping his hands around my arms, my attacker cuts off the circulation of blood. Rug burns flare across my skin as he drags me across the carpet. He closes his hands around my neck, shutting off my air supply. I pull at his hands but it’s no use; he has always been stronger than me. My pulse drums a frantic beat in my ears. The air slowly leaks out from my lungs, killing any hope I may have left. I search for the gun around the room; it may be my only savior now.

“Why are you doing this?” I struggle to get the words out. He squints his dark eyes. I’m wondering if there might be a chance that he will stop this madness. I am wrong.

“It’ll be over soon, sweetheart.” His hands again tighten around my neck, blocking the air from entering my lungs.

Dana Provo has always loved books and reads everything from young adult fantasy to adult historical romances. When she’s not reading or writing her next novel, Dana can be found riding her horses and getting ready for competition. Dana lives with her husband and two house plants in Richmond, Virginia.

You can Purchase Bleeding Hearts here!