I can’t get enough of those Merrick Brothers. A review of Spirit by @BrigidKemmerer

Posted on October 27, 2017 | Comments Off on I can’t get enough of those Merrick Brothers. A review of Spirit by @BrigidKemmerer

Spirit by Brigid Kemmerer (Audiobook) This is book three of the Elemental Series, a story about a family of brothers with the powers of the 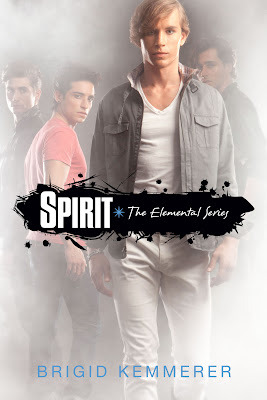 elements, and the people who keep coming to try to kill them. Hunter is introduced in book one as one of the people coming to kill the brothers, so I was a bit surprised to see him in his own book, but the author makes it work, and delivers a well-rounded, deep character that you could understand— even if you want to smack him upside the head for being stupid and annoying most of the time.

The real shining star in this book is Michael, the oldest brother, who is struggling to raise his three high-school aged brothers on his own (while people are always trying to kill them). Now he’s faced with another troubled teenage boy who Michael wants to help, but he needs to be wary of, because this dude was trying to kill them all in the first book. Checking ahead, Michael gets his own book in book five, so I’m suddenly very interested in getting there, but cautious, because the book’s name is “Sacrifice”. Nooooo! Anyway, the next book is about the third younger brother, and I’m totally looking forward to it.