Blasting through space with a Starship Mage by Glynn Stewart.

Posted on January 22, 2018 | Comments Off on Blasting through space with a Starship Mage by Glynn Stewart.

Starship Mage by Glynn Stewart (Audiobook) This is one of those books that I don’t know where I found. I picked it up quite a while ago and it has been 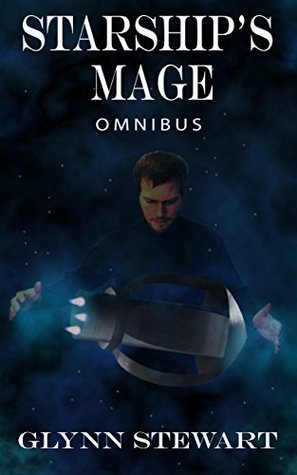 sitting there while I kept adding more and more audio titles to my library (Yeah, I know. My Ebook collection is even worse.) Anyway, after reading romance for a few months, I finally tapped on Starship’s Mage.

All I have to say is GREAT GOOGLEY MOOGLEY where has this book been all my life? I mean, seriously, people… Why is the world not screaming about this story? Why isn’t there a movie?

Okay, so, yes, there are a few flaws. I really wish that there was a bit more emotional engagement between the characters. The good thing about listening on audiobook is the narrator can sometimes fill in these blanks with their voice, but the connection was still lacking in some places. The second, and probably more noticeable problem is the author likes to repeat himself. (A lot) One chapter we have this epic battle scene, and at the start of the next chapter we re-hash that battle scene (in case the reader forgot) And he kept explaining about the ribs turning around the ship, and we are told over an over that the simulacrum is in the center of this ship, and what it can do, and that the captain is burly, and that Damien is a mage and can do all this cool stuff. You get my meaning? The book feels a little but like it was written in serial (Which would make all of the above perfectly acceptable) and then it was glued all together to make one novel.

Don’t get me wrong. These are INCREDIBLY minor issues when we are talking about how freaking fun this book is. I was instantly drawn in, connecting with the main character, Damien, as he strolled the halls of a space station, looking for a job. I instantly loved the down-on-his-luck captain who needed a mage and was being denied one by the powers-that-be. You see, if you don’t have a mage to work your simulacrum, your ship can’t jump (think Han-Solo and hyperspace). Now, nobody knows it yet, not even Damien, but he is more powerful than your normal mage, and we are about to jump on board to one of the most surprising, exciting, adventures out there… Because the captain is already on the run with a price on his head, and when people find out what Damien can do, the intergalactic police, the mob, and several bounty-hunters will stop at nothing to get their hands on him.

There are a few points where the characters make poor choices that a seasoned adult should know better, but all in all I say, “Who cares?” because I had that much fun reading. If you like science fiction, don’t walk, RUN to pick this baby up. I seriously don’t think you’ll be sorry. An easy five stars. I liked it so much I can’t even subtract a star for the repetition. [She opens up her phone to pick up the next book in the series]

NOTE: I went back for fun and read a few reviews. Many mentioned the repetition, but several mentioned too much use of the F-Bomb. I don’t actually recall this. It is possible the audio-narrator left them out. Anyway… I wanted to say that if there were a lot, I didn’t notice, and I am one of those people who would normally subtract a star if profanity is overused.

Comments Off on Blasting through space with a Starship Mage by Glynn Stewart.