I will never read another book the same as I used to.  Every little thing that’s wrong JUMPS out at you when you become a serious Beta Reader.  Have you ever noticed that? 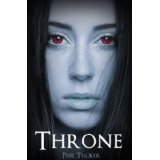 Anyway, let’s chat about THRONE by Philip Tucker.  I am going to use the general “Oreo Cookie” concept for reviewing this.  Start with the crunchy goodness, dig into the squishy bad, and then end on a crunchy good note.  Not actually hard to do on this one.

THRONE is one of those novels that starts you in the real world in someone’s everyday life, and then catapults you with a slingshot into a new world that you never knew existed. 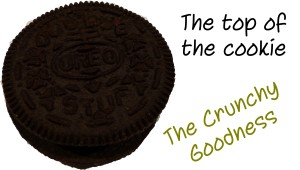 THRONE takes you on an exciting and action packed journey in a very unique and eventful plotline with a very interesting premise.  Throughout the first half, you know the two main characters are going to meet, but how… and “who is who” is a mystery until it practically happens.

And once they do meet… strap yourself in, because the rollercoaster is heading up the hill, and the ride is about to begin. (I can’t really tell you more without spoiling anything)

The five phases of my monotonous reading mind….  Everything falls into one category:

Before I dish out the creamy filling on this novel, let me point out that I really liked it a lot.  Loved it?  No, because of what I’m about to discuss, but I would definitely consider reading another of  Philip Tucker’s novels.  I just need to pay closer attention when I start reading.  Let me explain…

Part of the top of the Oreo cookie is the amazing imagery in this novel.  I want to read some of it again because people have said that I use too little imagery  in my writing.  I want to study how the author did it.  The good part was that I knew exactly what the scenes looked like.  The reason why I am mentioning this in the “creamy filling” section is because the imagery went on for TOO LONG in almost every case.

I got a clear view of the scene, started skimming, and clicked my kindle three times to advance, and the character is still looking down the street.  – Again personal preference.  It was EXTREMELY well written, and I can learn a lot from this… it’s just too much for me personally.

If you decide to read this novel (and yes, I would recommend it)  Keep in mind that it is written in two very regimented Points of View.  To be completely honest, I did not realize it was in two points of view until about 16% of the way through it.

The novel is written with one chapter in Maya’s POV, and then the next chapter in Maribel’s POV.  Then it interchanges back and forth.  For some reason, I did not pick up on this until 16% of the way in.  I thought it was the same character.  I thought one chapter was in the current time, and every other chapter was a flashback.  Yes, they have two different names, but for some reason that didn’t click.  Maybe it is because both names started with “MA” and one was older than the other.  I’m not really sure what happened, but for some reason I just didn’t “get it”.

Sooo…. You can imagine my confusion.  I was having trouble keeping track of what events happened to which character.  If you read this, keep in mind that there are two POVs and you will have no problem.

When your dog starts talking to you

Reactions to suddenly talking animals:  Place yourself in a city.  You are running from something freaky.  You hide in a building, and all of the sudden this fox pops up and starts talking to you…

I’m sorry.  No matter what is going on, if a fox starts talking to me I am going to be FREAKED OUT.  I didn’t buy the character’s reaction to this happening.  She was too quick to be okay with this.

Another thing that disappointed me was the sudden change in one of the main characters.  Yes, it had to happen for the story to move forward, but after the detailed imagery and wonderful characterization throughout the novel, I felt a little cheated by this sudden change, and it seemed out of character to me.  If someone acts in one way, and then has an extremely DRASTIC turn in characterization, I need to SEE IT COMING to buy it.  Even after finishing the novel, I still don’t buy what happened right after the one character “changed”.  When she did “what she did” only seconds after the “change” I was stunned, and not in a good way.  She did remain in her “changed” state quite well after that, though.  It was just that transition that didn’t seem believable to me. (Gosh, I wish I could explain that better-but I don’t want to drop any spoilers)

After all this happens, jump on to the rollercoaster for a huge, and I hate to use a “trendy word” – EPIC battle scene.  This scene goes on FOREVER… and I mean that in a good way.  I was not bored for a single second.

At one point I thought the battle was going to be over in a very cliché way, but “Oh no!  It didn’t work!”  Run everybody run!  Get out of there!  WHEW!

The pacing was excellent, and I didn’t see the resolution to the conflict before it was in the process of happening.  Nicely done.

The close of the novel

The novel winded down and closed extremely quickly, in a slightly unexpected way, but very satisfying.  (To pop back over to the creamy filling, I would have liked one more chapter in the other Main Character’s POV, because I don’t think her story really closed enough to my satisfaction)

I would have liked a little more of a wind down, but again… I realize that is personal preference.  After being in the middle of that roller-coaster battle scene, I had a bit of that “whiplash” feeling when the high-speed coaster’s breaks hit the tracks.  BOOM!  Last page.  It’s over.  Get out.  You’re done.  A little too abrupt for me.  Again—not going to subtract a cookie for this, since that’s just my preference.

I will give this novel four out of five Oreos.  It loses one-half an Oreo each on two points… because I was confused to start… and it had too much imagery for my tastes.  From me that is a glowing recommendation.  I really liked it despite what bothered me about it.

I would recommend this to any writer looking for an example of well-written imagery (I’d just suggest cutting your imagery a little slimmer if you want people like me to read it.)

I’d also recommend it for anyone that would like to experience a GREAT battle scene… and I mean that.  You won’t just read it.  You will experience it.

Some More Book Reviews out in the Blogosphere