Get you Kick-Butt Action on! A Review of Forever Dusk by Jocelyn Adams

Posted on February 12, 2016 | Comments Off on Get you Kick-Butt Action on! A Review of Forever Dusk by Jocelyn Adams

Woohoo! I really loved the first two books in the Mortal Machine series, Darkside Sun and Midnight Dawn. This is a kick-butt action series with one of the most incredible paranormal worlds I’ve ever read.
When I heard that the long-awaited final installment, Forever Dusk was finally releasing I jumped at the chance to get an ARC, and I’m so glad I did.
Now, first things first, I’m not sure what’s up with the cover for Forever Dusk, but don’t let it turn you off if you haven’t read the series. This IS NOT an erotic romance novel. This is about nasty demons trying to break into our world and eat everyone … and a group of kick-butt soldiers fighting and dying under the radar to keep us all safe. This is first and foremost paranormal action/adventure and maybe yes, a little romance thrown in for good measure.

My feelings for the final installment in the series were a little mixed. To be honest, I wish I could review just the second half of the book, because here is where I saw all the elements of the Mortal Machine that kept me screaming for more in books one and two. For some reason Addy was in a very different place in the beginning of the book than I expected her to be. To an action junkie like me, I felt like she was hanging around and “thinking” too much. I suppose there were two books of backstory in there that needed to be covered, but I didn’t see the Addy that I loved on those pages, and I missed her.

HOWEVER at about 40% into the story (I read on an E-reader) Baku lights a fire under our girl’s butt and she is off and running again. The second 60% of Forever Dusk is jam-packed full of all the awesome Mortal Machine goodness that made me fall in love with the series a few years ago. We also see one of the greatest races against time that I’ve read in a very long time. You know the kind I mean: Do something completely insane up against incredible odds, and be back before sundown or the world will come to an end. (Literally)

Being as non-spoilery as I can, Forever Dusk tied up all the loose ends, pulling at all my heart strings and leaving me a very happy camper.

As a series, I’d give this a clean and easy five stars. If you are looking for something you haven’t seen before, THIS IS IT. Get ready for a great ride!

Since their last battle, life for the Mortal Machine—the secret-society that protects Earth and its inhabitants from dark outside forces—has become almost…normal. For everyone but Addison. The evil she’s imprisoned in her soul has begun eating away at her sanity, and despite her soul mate Asher’s efforts to hold her together, it’s causing painful and terrifying delusions.
Consequently, nobody believes Addison’s warnings that Marcus, their old enemy, has returned. When Marcus threatens Asher and the Machine, she agrees to find what he seeks—a treasure that, in his hands, could be deadly.
If she relies too much on Asher, she knows he’ll likely imprison her, if only to preserve what’s left of her deteriorating mind. But if she fails this final test, Earth will fall. So Addison is forced to distance herself from her love, to prevent the life she wants with Asher from being over before it truly begins.
Find your copy of FOREVER DUSK:
Amazon | B&N | iTunes | Kobo | Entangled | Goodreads
Previous Books in the Mortal Machine Series:
Darkside Sun (Book One) 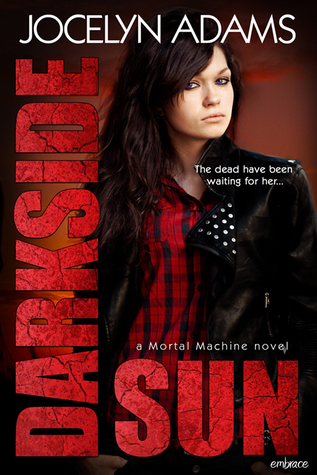 Addison Beckett tries hard to pretend she’s normal, but she’s far from it. Since she was six years old, she’s seen the world around her unraveling, as if someone is pulling a thread from a sweater and it’s all slowly coming undone. When she ignores it, it goes away, so that’s what she does.
Enter her arrogant-but-hot professor Asher Green. He knows all about her special brand of crazy. In fact, he might be just as nuts as she is. Asher insists that the dead from a parallel dimension are trying to possess the living in this one. And since Addison seems to be the only one who can see these “wraiths,” she just might be the key to saving the world.
Addison wants nothing to do with Asher or his secret society, The Mortal Machine. But as their animosity grows, she finds it harder and harder to ignore the chemistry between them. And when she discovers that Machine laws forbid her from touching him, she realizes that’s all she wants to do.
Stop the wraiths. Break the rules. Save the world. All in a day’s work.
Normal was overrated, anyway.
Find your copy of DARKSIDE SUN:
Amazon | B&N | iTunes | Kobo | Entangled | Goodreads
Midnight Dawn (Book Two) 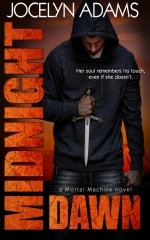 With only three days until the wraith king turns the earth into an all-you-can-eat buffet, Addison Beckett is forced to enlist brooding sentinel Asher Green’s help to unlock the Mortal Machine. According to the founder, all she has to do is find the sanctuary—the same sanctuary she can’t remember because Asher erased her memories.
Trying to save humanity while navigating Asher’s lies is a royal pain. But the more time she and Asher spend together, the harder her soul tries to remind her what else he’s made her forget—that he loves her, wants her, needs her.
When she’s trapped by the wraith king and forced to pick who will stand by her in the coming battle, Addison is faced with an impossible choice: the sentinel she loves who refuses to love her back, or a powerful stranger who insists they’re meant to be together. Her decision will determine the fate of humanity, and once decided, can’t be undone.
Find your copy of MIDNIGHT DAWN:
Amazon | B&N | iTunes | Kobo | Entangled | Goodreads
About the author:

Jocelyn is an office grunt by day and creator of romance and adventure by night. Born a farmer’s daughter with a vivid imagination, she spent her childhood dreaming up stories that remained untold until 2010.
With no formal training, she relied on the honest feedback of her writing group to take her from that first short story all the way to THE END of her first novel. She now has eight published novels and has recently signed a 3-book deal with Entangled Publishing.
When she isn’t slinging words, you can find her shooting her bow or enjoying the serenity of family life in her little house in the woods.
Connect with Jocelyn Adams
Website | Blog | Facebook | Twitter | Goodreads

Comments Off on Get you Kick-Butt Action on! A Review of Forever Dusk by Jocelyn Adams