Posted on September 16, 2016 | Comments Off on Twelve Year Old Reviews “My Brother is a Super Hero” by David Solomons 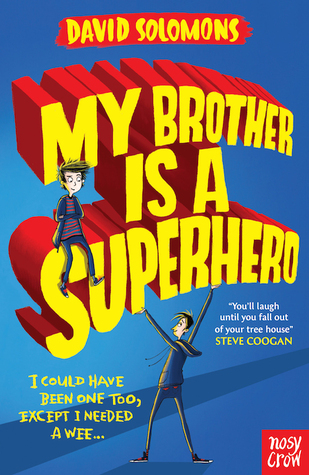 This book is about two brothers who hang out together in a tree house. One day, while the younger brother goes into the house to go to the bathroom, aliens come down and make Zach, the older brother, a superhero.

There is a guy who always wanted super powers so he tries to kidnap Zach.

What I liked about this book was I really liked the action and the mystery since the little brother was trying to stop his friend from finding out that Zac had super powers.

The ending was also great. It was really intense and I liked the way it all worked out. There is a really good theme, but I can’t tell you or it would spoil the ending.

I would rate this book a four out of five Oreos because I really like action books and this is a really really good action book. So, yeah, I recommend this book for young readers who like action.

Learn more about this book HERE

Like Loading...
This entry was posted in Book/Movie Review and tagged Book Review, david solomons, jennifer eaton, jennifer M. Eaton, my brother is a super hero, Review. Bookmark the permalink.