It’s the Cover Reveal for INVADED!

I’m so excited (and maybe a little nervous) to reveal the cover of my new novel INVADED.

Why nervous?  Well, INVADED is an extremely different novel for me.

In many ways it is soooooo me—

All the feels? CHECK.

But this isn’t my typical light-hearted story. This is a paranormal serial killer murder mystery that takes place in present day.

This puppy is NOT light in any way, shape, or form. It also isn’t a quick read. This is a 460-page monster book. (Well, monster for me. It’s nearly double the size of my normal books.)

And this novel is meant for adults. This means adult content. Please expect all the intense imagery and a emotion you’ve come to expect from my stories, but from a very adult angle. Some of the scenes may be disturbing— I mean, SERIAL KILLER, get it?

So, if you are okay with an adult read, and you enjoy a good thriller, I hope you love INVADED. This is a book that SCREAMED to be told. (Pun only partially intended.)  Sneak peek of the first chapter below the cover reveal! 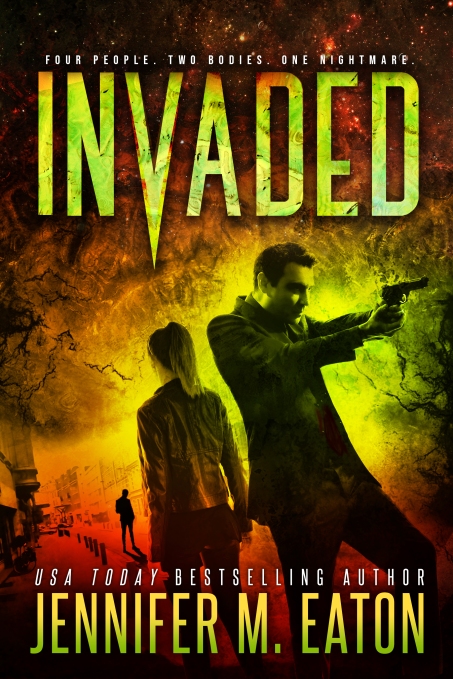 The day Tracy Seavers dies, Detective John Peters arrives on the scene of the car accident to find she has miraculously walked away. An impossible conclusion, had the same thing not happened to him five years before. John suspects Tracy is now host to an alien entity with incredible healing power, and sometimes sinister needs.

John wants Tracy almost as much as the entity inside him yearns for the new alien hiding within the beautiful brunette. The last time John got involved with another host, though, it ended in disaster. So Tracy is off-limits, no matter how much he and his entity want to wrap themselves around her. Instead, he throws himself into the ultimate distraction: finding the serial killer stalking their town.

When both John and Tracy start having blackouts, and new evidence points to an entity as the killer, John has to admit that now even he is a suspect; and the only other alien in town lives inside Tracy. Unless he can find another.

If you love the emotional connection of Jennifer L. Armentrout, the alien possession in THE HOST, and the dark intrigue of Criminal Minds, you’ll die for INVADED.

If you read on Kindle, you can preorder your copy here from Amazon.com.

Detective John Peters squatted beside a bloodstained patch of sand. He tuned out the news helicopters circling the bridge overhead. The overturned tractor-trailer and the smashed blue sedan straddling the guardrail above would make for a decent headline, but they always wanted more. He could feel their cameras zooming in, looking for the body they’d been promised. But deceased accident victim, Tracy Seavers, was no longer there.

“Dead girls don’t just get up and walk away.” The off-duty EMT, first on-scene, folded his arms. “I’m telling you, that girl was lightyears past CPR.”

The odor of diesel engines carried on the late-summer breeze as another firetruck arrived on the bridge. Circumventing the body’s last known location, John blotted out the noise and concentrated on the conundrum at hand.

“There was nothing I could do for her.” The EMT shaded his eyes, squinting at the collision scene above. “I heard the other girl screaming, so I climbed the hill to see if I could help.”

He crouched in the space between the impact-site and a pink, size-nine loafer lying sideways in the sand. A trail of footprints led into the trees where a few uniformed officers directed doe-eyed interns on search and rescue procedures.

John sighed, surveying the reckless clusters of college students as they left holes in their search patterns any seven-year-old could avoid. If they hunted for their keys like they searched for a missing person, they’d never get out of their goddamn houses in the morning. But he couldn’t be particular about personnel when there were so few cops left in the district.

The detective in him hoped one of them would shout they’d found the girl. That’s what every cop wanted: a clean wrap-up. But this wasn’t going to be so simple, especially with this team.

John walked beside the prints: one foot bare, the other displaying the zig-zag pattern of the lost pink loafer. The steps were narrow, the un-shoed foot dragging with a possible limp. He glanced up to the bridge, where a tow truck started to haul the sedan off the guardrail.

The EMT was right. Chances were slim Seavers survived a twenty-six-foot fall, especially after being hit head-on by an eighteen-wheeler. But if the woman hadn’t walked away on her own, someone had taken a great deal of effort to make it look like she had.

His phone vibrated. John glanced down at the screen. He only followed one informational feed—the one he wasn’t supposed to have access to. The message wasn’t much of a surprise.

John gritted his teeth, wishing he could get his hands on File 39740, but unless he gave up being a detective and joined the FBI, an all-access pass to government secrets wasn’t coming any time soon. The only certainty was federal agents were on their way.

His gaze returned to the EMT as John slipped the phone back into his jacket pocket. This guy’s testimony didn’t matter anymore. Tracy Seavers’s disappearance wasn’t a crime or even an elaborate hoax. This…this was something else.

And now it was a race to see who’d find Tracy Seavers first.

John moved toward the trees as his partner, Art, dismissed the EMT. The breeze shifted the canopy, casting spotty shadows over the teams mulling through the brush. Their search patterns were too concentrated. Yes, Seavers was hurt, but she had a head start on them. They needed to move deeper into the woods.

Art jogged up alongside him. A shirttail had come untucked from his pants. “We joining the search already? You don’t want to grill anyone first?”

John shook his head. “Saw everything I needed to see.”

“So, you think someone took her body?”

Someone definitely took her body. The question was, where did they go with it?

The roiling in his chest quickened.

Calm down. She couldn’t have gotten far. We’ll find her.

John stopped walking and rubbed his chin as two canine squads entered the woods. The dogs lowered their tails and walked in circles. One barked and headed into the forest before stopping and spinning around a tree. It was going to be a long day for those guys. Like the EMT pointed out, Dead girls don’t just get up and walk away.

The guy had no idea how right he’d been.

John drew in a deep breath and expelled it slowly, soothing his disquiet.

This had happened before. Once. Five years ago.

But that time, John had been the dead person who got up and walked away. 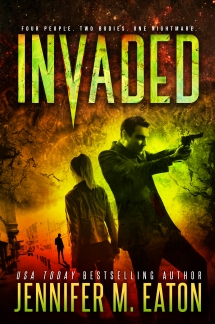 I hope you loved the first chapter of INVADED.

If you read on Kindle, you can preorder your copy here from Amazon.com.

Yes! Please shoot me to Amazon to preorder INVADED!

Print will be available from your favorite retailers any day now.

Thanks, guys. You are the best!

One response to “It’s the Cover Reveal for INVADED!”