I got Attacked by a Turkey. Seriously! For-Real!

I swear. You can’t make stuff up this good. If I wrote this into a book, someone would whack me in reviews: “Nope, it would never happen.”

Well, I’m here to tell you, it did.  And I took a picture to prove it!

So this is what happened.  We were coming home from church and my son looks up from his phone (miracle of miracles) and says, “Umm, why are there turkeys in the road?”

Now, I don’t see the turkeys at first. I’m concentrated on the cars stopped on the other side of the road, but once we get a little closer I say, “It’s probably turkey vultures, I don’t think it could possibly be…”  Yeah, note the drop off there… as in not finishing the sentence?

That’s because as soon as I got close enough, one of the turkeys stopped attacking the car on the other side of the road, turned, and started attacking MY CAR.

Huh?  And, yes, they were actually TURKEYS. I was a little unsure until one opened up its tail-feathers like a peacock. I wish I could have gotten a picture, but I was too busy trying to not hit his mate with my car.

Here are the little buggers, on their way to attack my tires. 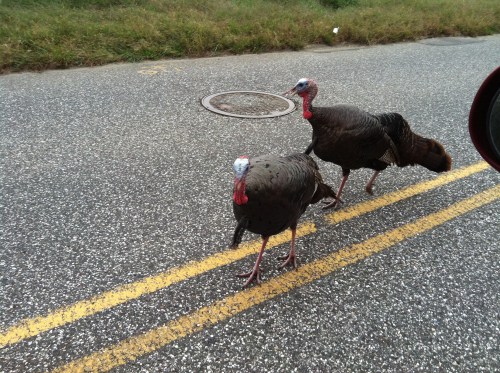 Now, me and the lady on the other side of the road, lucky for these turkeys, were nature lovers, and were trying to let them pass. Of course, they did not want to pass.  They wanted to eat our tires. So we each took turns.  I would drive a few feet, and the birds would leave her car and jump over to attack mine.  As soon as she started moving, they jumped over to attack her.

Now, think this over.  I was leaving church, so there is a long line-up of cars behind me, and cars started lining up behind her in the opposite direction as well.  The guy directly behind her starts honking his horn.

She leans out and yells, rightly so: “Where do you expect me to go!”

Would you believe that guy tried to throttle around her, and actually hit one of the birds?

Luckily for the turkey, he had a big breast and kind of just bounced back. (Ha!  The turkey, not the guy)

Finally I was able to get by.  When I reached the next light, the car behind me pulled up and said, “Can you believe that?  I got a picture, cause no one in a million years would believe we got attacked by a couple of turkeys!”

But the biggest turkey was the jerk who didn’t stop. Big stupid too much in a hurry to enjoy nature idiot.

For those of you in the USA (Except for the guy who didn’t stop) Have a WONDERFUL Thanksgiving. And for those of you outside the USA, Nothing’s stopping you for giving thanks for all the wonderful things in your life, too.

What goes around comes around.