Lesson Twenty-Two from a Manuscript Red Line: Does your Protagonist “Grow Enough?”

2015 comment: Pay careful attention to this one. I think this is one of the most frequently missed aspects in first drafts and first manuscripts. There has to be a reason for your story. Your character must “Grow”.

In the closing comments of the Gold Mine Manuscript, the Publisher who red-lined it noted that the MC didn’t “Grow enough”. 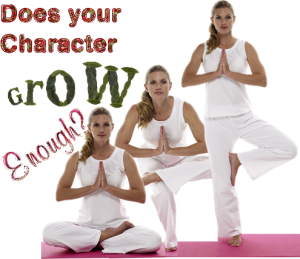 They said the main character does not have a struggle in the story that pulls him from one state of being to another.  They thought he was pretty much the same at the end of the novel as he was in the beginning.

I’m not really sure I completely agree about this comment.  I saw little changes in the character throughout the novel.  I suppose the problem was the presentation of the final scene.  The author wound down from a big action scene very well, and in the end, the MC is relaxing and thinking.

I am just guessing here, but maybe the Main Character’s thoughts should have reflected HOW he is changed.  Maybe he should be thinking:  “Wow, I was such a stuck up prude, and the world used to revolve around me, and now I just put my life on the line and fought an army and stood up for myself to protect a whole kingdom!”

Okay, that was really bad, but do you get my meaning?  Again, this is totally a guess, but this publisher is looking for “the change”… What happens to the MC along the journey that makes him or her a better person?  This, again, brings me back to my own novel (and you should be thinking about yours)

However—does he think about this in the closing scene?  Well, no, he doesn’t.  But… in the last few lines there is another change that slaps the reader in the face with an “Oh my Gosh!”

My overall change, like in the Gold Mine Manuscript, happens during the climax.  Then there is this little hook after the wind-down in the last paragraph, which could be considered an epiphany.  It includes another change, and then a “no way!”  Is this going to fly in the publisher’s opinion?  Dunno.

Admittedly in the first draft, he really didn’t change at all… at least on the inside.  I didn’t know this was a pre-requisite for story-writing.  Now, I think the change is there.  At least, I THINK THAT’S WHAT I WROTE (Go back and read that post if you don’t remember it)

I hope my stab at an exciting last page didn’t “blow it” but I guess that’s for the publishers to decide.

2015 addendum:  Three years after writing this original post, I am VERY conscious of character change. My stories have both a “plot” arc (The exciting stuff that happens in the story) and a “character arc” (How the characters *all of them* change throughout the story.)

Take a good look at your manuscript. How do your primary and secondary characters change as events of the story unfold? Are they the same person?

Posted in Gold Mine Manuscript