First of all, congrats to last week’s winner Grandfathersky

You’ve won a free copy of HUSH LITTLE BABY by Deborah M. Piccurelli in your choice of paperback or PDF.  If you want to know more about Deborah, Check out her web site here

So, who’s coming this week.

I hope it’s someone fun.

Are you going to be nice this time?

Well, you were a little rude.

I was a perfect little blue alien

Yeah, sure you were.

Okay, we’ll give this another go.  (Sorry Kastil)

Yeeeees!  Okay, bring her on in!

Hello, oh nice author lady.  come in and sit down for a spell.  Comfy?  Good!

Okay. Who are you and what do you want?

Umm.  Okay.  I don’t think the curly-haired conservative chic is going to let me get away with that.

You never know unless you try.

Psst, Jennifer, this one scares me.

You wanted to be an interviewer.  Just go with it.

Okay… Ms. Evenshade… What makes you think you book is good enough to read?  I mean Romance?  Really?

It’s good enough because it break the usual romance mold, beyond it having a bit of kink in it. I mean a romance novelist making fun of her craft?

You mean there’s a spaceship?

Then why would anyone want to read it?

For the humor and love story within, of course!

Sounds boring does anything explode?

Well that’s a loaded question. Something explodes but I won’t call it literal fireworks. 😉

Ummm–Jennifer, I don’t think she and I are talking about the same thing.

Go with it.  You’re doing fine.

but what’s it about?

From the legendary times of the Victorian Age to the rugged reaches of outer space, the romance novels have done nothing to spark Patricia’s want and hope of finding that one special man to call her own. She’s knee deep into her thirties, near depression, and drowning her sorrows in pints of premium ice cream. When she falls for a waiter named Matt in her favorite restaurant, her insecurities do their best to thwart her plans of true love. It isn’t until she picks up one last romance novel that she realizes life cannot be lived within the ink splattered pages of an author’s fantasies. She has one chance to set her life straight and snatch the one man who gets her: mind and body.  Will Patricia take it?

Why do all these authors sound like robots when you ask them that question?

She is not!  She just writes, umm, well, a little more openly than you’re used to.  Hey, the guy on the cover is cute.

You just don’t get it, do you?  Okay, try to find something you guys have in common.

[Grumbles] Have you ever exploded anything?

You are hopeless.  Have you ever tried to take over the world?

Have you ever painted your hair blue?

I once had a midnight blue because I bought the wrong kind of black dye.

Really?  Well that sounds like fun.  I prefer a little brighter myself, but I must admit that blue is fun!  Maybe you’re not so bad after all.  So, if you are afraid of loud noises, have you at least fantasized about exploding anything?

Yes. It’s only natural to imagine something getting blown to a million pieces.

Yes!  There is hope for her yet!  Okay, you kindred explosive spirit, I will allow you to give away a .pdf copy of this book with the creepy half-headed guy on the cover.  What’s it called again?

Yeah, that.  And Jennifer promises to explain the half-naked man on the cover to me later.

So!  Get on with it readers!

Do you want to read about this girl and her half-naked half-headed man?  Start commenting!  One random commenter will receive a .pdf copy from this crazy kindred blue-haired thinking about explosion lady, Kastil Evenshade.

Thanks for coming, Kastil!  the winner will be chosen on Monday, so get commenting!

If you’d like to find out more about Kastil and the gads of books she’s had published, hop on over to http://kastil.wordpress.com/ 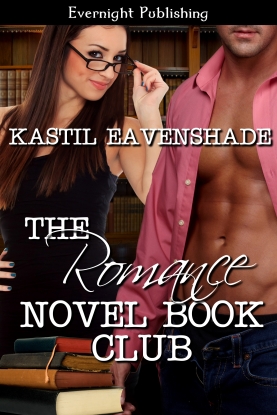