EEEE Gads! Why the heck did I read a Western? A Review of Mended Hearts by Olivia Devereaux

Reason  #1:   I am submitting a short story to the same publisher “Still Moments Publishing” … and as any good author should do, I wanted to research something that they recently put out (April 2012 in this case.)

Okay, so …  this publisher has tons of titles…

Reason #2:  A little bird told me that this story was submitted for consideration in an anthology, but they did not think it was a good fit. 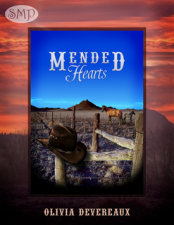 However…. They liked it so much they wanted to publish it as a stand-alone.  They even created a new “western” category to their offered listings to slip it into.

All this drew my attention, so I bit the bullet (Tee Hee) and resisted my urge to cringe at the [very stark, boring and very western] cover.   I bopped over to Amazon and popped a copy into my Kindle.

Here’s the jist of this 28-ish page story:  A family is living out in the middle of nowhere.  Dad gets hit by a stray bullet and dies.  The next day the son finds another guy (a stranger) in their barn bleeding from a gunshot wound.  The widow takes him in and cares for him, hoping that when he wakes up he will be able to tell her what happened to her husband.

Yeah… boring.  Not a spaceship in sight.  However…

Let me tell you something …  I think this lady could probably re-write Humpty Dumpty and be able to get my attention.  Within a few pages, I totally forgot how much I hate the Old West as a genre.  I was completely absorbed in the story, and emotionally connected to the characters.

.
Oh! Let’s not get carried away there.  Reign yourself in, Buckaroo!

Normally I have a laundry list of things to pick out.  You know… general writer’s mistakes that make me cringe.

I bow down to the writing Gods and say “Why Why Why can’t everyone write this cleanly!”

The writing was crisp, fresh and for the first time this year – NO TYPOS.  Yay!  Extra cookie just for that, because that has really been ticking me off lately.

So, what was wrong with it?  I had to rack my brain, but I will nit-pick on two very minor things.

Number one:  This woman’s husband just died.  She is still has dirt on her skirt from burying him… and this other guy shows up.  She is instantly attracted to him (but at least feels guilty about it.)  This is what bothered me about this:  She is portrayed as really loving her husband.  So, I put myself in her shoes …  If my husband just died a few hours ago, I would barely be able to look at a man … let alone find one attractive.  I just found that unrealistic. – subtract half a cookie.

Number Two:  I hate when names sound alike.  It confuses me.  Maybe it is because my eyes read quickly, and only pick up certain letters, but this is just a pet peeve of mine.  The Woman’s name is Ella, and her son’s name is Eli.  Now, I realize this may have been one of those “name your kid after you” things,  but every time I hit “Eli” my eyes read “Ella” and I had to go back and re-read because I got confused.  –Subtract another half a cookie

So, for these two nit-picky things, I am nibbling away at one full cookie.

I have to say that I thoroughly enjoyed this little-ditty, yes-sir-eee.  If the writing were poor… if it had not flowed so well, and if the characters were not so well rounded, I may have remembered I was in a Western.  If the chemistry between the Widow and the patient wasn’t so dern good, I would have been annoyed by her initial attraction to him for longer than a page.

The writing was just dern good.

So, what’s the verdict?  She lost one cookie in the creamy bad stuff section.  And, sorry, it’s the rules … I need to take away another due to lack of explosions.  So that leaves three out of five cookies.

Oh!  Wait Jennifer!  You gave her an extra cookie for having no typos!

Well, yes-sir-eee you’d be right about that, Buckaroo.  That is a grand total of Four out of Five Oreos for Mended Hearts by Olivia Devereaux.

[She cringes]  Ewwwwweeee!  I just gave a nice review to a Western.  What is this world coming to????

Today, for Six Sentence Sunday, I am featuring six from a novelette I just finished.  This was a weird one for me, because it was a Western.  I’ll explain why I read it when I review it on Thursday.

These sentences are from “Mended Hearts” by Olivia Devereaux

The main character, Ella, is telling her young son that his father has just been shot.  They live away from the town, and are all alone.  She just finished burying her husband all by herself.

Eli rushed to her, throwing his arms around her waist.

His tears leaked out and splattered her forearm, but he didn’t utter a sound.

The dust in the yard kicked up in a mini wind devil before dissipating.

She never thought he’d be the first one to go to the ground.