A few weeks ago, I attended the Southeastern YA Book Festival in Murfreesboro Tennessee. This is a fantastic teen-centric event that takes place over three days.

I was a little nervous heading out there, to be honest. I had to fly to get to TN, and after being disappointed by the turnout and/or engagement at most book festivals, I was very worried that this would not be worth the time and expense. What I found when I got there, was the most well-run and considerate event I’ve ever attended.

A bubbly, friendly SE-YA advocate Emily picked me up at the airport and drove me to my hotel. My hotel room was ready with a comfy bed, and a bad of goodies to make me feel at home after a long day of traveling.

After breakfast at the hotel, Lovely book-lover Marcia picked author Mindee Arnett and I up and brought us to Siegel High school, where the school librarian, Deborah, introduced us to two separate groups of about 100 kids each. What a wonderful morning speaking to the kids, answering questions, and signing books. Then we sat back and relaxed and enjoyed a delicious lunch with the library staff and our driver before we were whisked back to our hotel for a nap. Dinner ended up being a big social affair. With 30 authors all staying in the same hotel, there were plenty of opportunities to make connections and meet new friends.

Day two was the official kick off of the SE-YA book fest. I wasn’t nervous until our driver pulled into the campus of Middle Tennessee State University, and I saw roads closed and cops directing traffic, and school busses (many school busses) unloading.

I think someone said 2000 kids were bussed in from schools all over Tennessee. Let me tell you, saying 2000 kids, and SEEING 2000 kids are two very different things.

After light refreshments in the green room, we were assigned a “whisker” whose job was to make sure we got to our events on time (sooooo helpful). I spoke on a panel in the morning in front of a crowd of 400 (I think, I didn’t count) kids. What a rush! 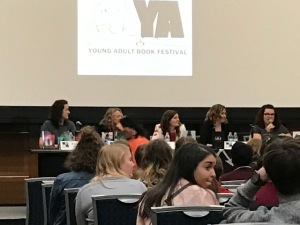 Then it was off to the bookstore, where the real mayhem began. The kids were so excited, and there were so many! I took some 30 second breaks in between signing posters, books, t-shirts, Tupperware, and even people’s arms. It was an unending line of happy, excited kids.

After that we were whisked back to the green room for lunch, followed by another panel of 400-ish kids and another book signing. What a jam-packed day! 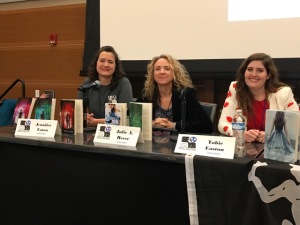 I have never seen so many kids excited about reading. Hats off to the schools for keeping reading alive in Tennessee! That night, there was a lovely reception to honor the volunteers, which gave the authors and volunteers time to sit and chat and enjoy some great food. It was a really nice evening.

Yup, snow. Kinda stinky since our whiskers had to whisk us between buildings that were pretty far away. Luckily enough, my whisker had a golf cart. I felt bad for everyone who had to walk between buildings but I was totally blessed with the transport. I was not prepared for snow whatsoever! I think our 9:00 panel was a little effected by the snow. I think there were about 25 people attending, but no worries! The Sci-Fi Fantasy panelists were ready to rock, and we had a great time. 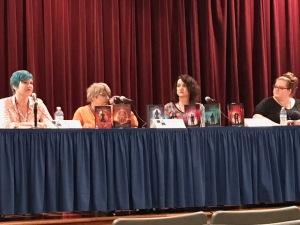 I think this was the most fun I’ve ever had on a panel. Then we were whisked off again back to the bookstore for another signing, then lunch, then a second panel, second signing, then back home where I collapsed on the bed and took a nap for an hour before the dinner frivolity started. Dinner was a great time to meet up and make friends with authors and discuss how much fun we all had during the day. 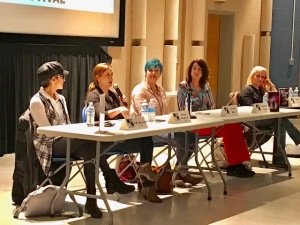 It wasn’t until the plane ride home until I was really capable of taking stock and absorbing all that had happened. This was an amazing event, and for the first time in my life, I told my husband:

“Wow, I would not even hesitate if someone asked me to do this again.”

Thank you to all the volunteers who put together this wonderful event.

SE-YA ran like a well-oiled machine. I find it hard to believe that this was only your second year. You guys made this look so effortless, but I have been to enough events to know HOW MUCH EFFORT goes into making something look that easy. You opened up the world of reading to thousands of kids.

SE-YA, this is an event you should all be extremely proud of. 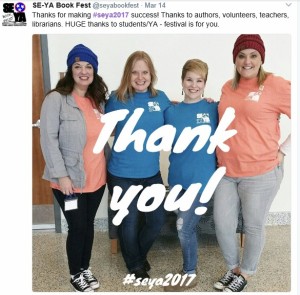